We consider it our duty to help private citizens and homeowners. With a combined 250+ years of analytical chemistry experience, our staff is always prepared to help residential customers with well water testing.

In order to assure that the citizens of South Dakota are provided with a good quality water supply, the Centennial Environmental Protection Act of 1989 requires that all new domestic wells drilled in South Dakota are tested for bacteria and several selected chemicals. The test results, which provide a general indication of water quality, are for your information and allow you to judge for yourself as to the general quality of the water.

The following narrative provides an explanation for each of the test results. 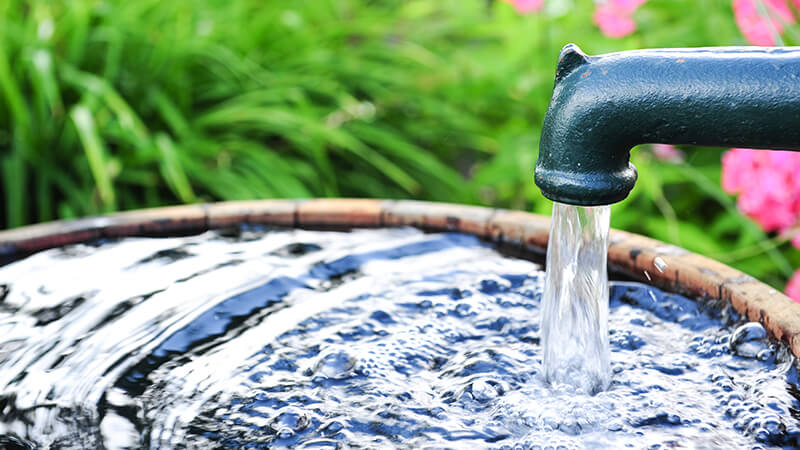 If the bacteriological analysis from your well water quality testing is determined to be unsafe for drinking purposes, it means there are organisms of the coliform group present in your water. These organisms are characteristic of sewage, sewage-like materials and surface drainage. Until your well water is tested and found to be safe, the water should be boiled before being used for drinking purposes.

Shallow and deep wells are most often contaminated by means of surface water, which enters around the pump, through the well cover, or through the upper few feet of the well casing.

Private wells are sometimes terminated in pits for the purposes of preventing freezing during cold weather. These pits will often collect surface waters, which may enter the well by overflowing into the casing or by seeping down the outside of the casing and then into the water bearing formation. It is possible for water to seep down the outside of the casing a considerable distance without the bacteria being filtered out, since the space between the drill hole and the casing often has not been completely filled in. From a sanitary viewpoint, well pits are not desirable.

It is recommended that the bacteriological quality of the water be retested at least annually. After heavy rains, snow melt, or flooding in the area of your well, a sample of water should be submitted for at least a bacteriological and nitrate analysis. At Mid Continent Testing Laboratories, we provide well water testing as part of our water quality testing services.

Nitrate is excess of 10 mg/L (as nitrogen) is of health significance to infants of six (6) months of age or less, and pregnant women. High nitrate water should not be used for infant feeding or formula preparation. Nitrate cannot be removed or reduced by boiling. Boiling will actually increase the concentration of nitrate in the water.

Sodium (Consult your physician for an interpretation)

Sodium may be a health concern to persons on a low salt diet. Most home water softeners are ion exchange (zeolite) water softeners. The sodium content is increased when water is passed through this type of softener. People on low sodium diets should consult their physician as to how much water may be consumed.

Water with a sulfate content in excess of 250 mg/l may have a bitter taste and have a laxative effect on persons not adapted to the water. Sulfates may contribute to odor problems. The sulfate content can be reduced in a private water supply through distillation or reverse osmosis treatment.

Conductivity measures the ability of water to conduct an electric current. It is related to the type and amount of dissolved chemicals in the water. In general, water having a conductivity of less than 1000 micromhos is slightly mineralized, but should be suitable for human consumption. It may have some hardness and it is possible to have taste and odor problems. Depending upon the particular chemicals dissolved in the water, these problems may become more pronounced with increasing conductivity to the extent that levels greater than 2000 micromhos may make the water objectionable to human use.

After having your well sampled, the test results, which provide a general indication of water quality, are for your information and allow you to judge for yourself as to the general quality of the water.

Chloride in drinking water is generally not harmful to people until high concentrations are reached, although chloride may be injurious to some people suffering from diseases of the heart or kidneys. Restrictions on chloride concentrations in drinking water are generally based on taste requirements rather than on health. The source of chloride may be a more important factor than the quantity of chloride; any sudden increase in the chloride content should be suspected as a possible indication of pollution and should be investigated further. Chloride should not exceed 250 mg/L (milligrams per liter).

Copper is currently regulated because of its effect on the taste of drinking water. Copper is an essential nutrient, but there is no evidence of copper deficiency in the U.S. population. Toxic effects from elevated drinking water levels have been reported, especially from infants. Copper imparts an unpleasant taste to drinking water, which along with an emetic (induces vomiting) effect, serves to limit the amount of copper which can be ingested from drinking water. The occurrence of copper in drinking water is usually a result of corrosion. The recommended maximum limit is 1 mg/L.

Water with a sulfate content in excess of 250 mg/L may have a bitter taste and have a laxative effect on persons not adapted to the water. Sulfate may contribute to odor problems. The sulfate content can be reduced in a private water supply through distillation or reverse osmosis (R/O) treatment.

Zinc is currently regulated based on taste considerations. Zinc occurrence in drinking water is most frequently due to the corrosion of galvanized ion pipe and fittings. Zinc is relatively non-toxic and is and essential trace element. At drinking water concentrations high enough to cause gastrointestinal problems, zinc would impart a strong astringent (puckery) taste and milky appearance to the water. The recommended maximum limit is 5 mg/L.

This refers to the amount of total solid matter suspended and dissolved in water. Water with a high solids content is generally a poor quality drinking water. A limit of 500 mg/L for drinking water is recommended.

The pH indicates the acidity of the drinking water. The pH scale is from 0 to 14 units with a value of 7 being neutral (equal amounts of acid and base). pH values less than 7 are acidic, and pH values above 7 are basic (alkaline). The recommended limit for pH is 6.5 - 8.5.

Alkalinity is not considered to be detrimental to humans, but is generally associated with hardness, high pH values, and excessive dissolved solids, all of which may be undesirable. No recommended standard has been set.

Excessive bicarbonate adds to the salinity and total solids content of water, and at high temperatures tends to form scale deposits on faucets and other plumbing. No recommended standard has been set.

This term is also called temporary hardness because heating will remove it. When water is heated, bicarbonate breaks down into carbonate and forms solid particles that can stick to in the inside of pipes or a heated surface.

This measures the ability of water to conduct an electrical current, and is related to the type and amount of dissolved chemicals in water. In general, water having a conductivity of less than 1,000 microohms may have slight hardness as well as taste and odor problems. Dependent upon the particular chemicals dissolved in the water, these problems may become more pronounced with increasing conductivity to the extent that levels greater than 2,000 microohms may make the water objectionable for human use.

Calcium is essential to human nutrition and a key element in the formation of teeth and bones. Calcium is also known as limestone and is a cause of water hardness that creates soap curd and scum in sinks and bathtubs. It forms scale deposits in water pipes, water heaters, and tea kettles. Calcium is removed by use of a home water softener.

Magnesium is one of the most common elements in the earth's crust. It is used as an antacid medicine. Salts of magnesium and calcium are a cause of water hardness and both can be removed by a home water softener. Magnesium sulfate at very high concentrations (above 1,000 mg/L) may have a laxative effect on some people that are unaccustomed to drinking the water and will also give water an unpleasant taste.

This value indicates whether the water tends to be corrosive (-) or deposit forming (+).

Hardness is the soap consuming capacity of water. The harder the water, the more soap is required to produce a lather. Hard water also causes greasy rings on bathtubs, sinks, and dishes, scale deposits in pipes and faucets, and poor laundry results. Hard water problems may be partially overcome for bathing and washing by the use of synthetic detergents or packaged "softening" compounds. The hardness of water may be reduced by use of a home water softener. Home water softeners increase the sodium content of water and therefore may be of concern to people on low sodium diets. Home water softeners do not reduce the total dissolved solids, nitrate, sulfate, or fluoride level of the water. Note that 17.12 mg/L equal 1 grain per gallon. South Dakota water are rated for hardness as follows:

In public drinking water supplies, potassium is an essential nutritional element, but in excessive quantities it acts as a laxative, and 1,000 to 2,000 mg/L is regarded as the extreme limit of potassium permissible in drinking water.

Fluoride is common in nature and is therefore a common component of drinking water. At certain concentrations (.7 mg/L in SD), fluoride is beneficial by reducing dental cavities significantly. Higher levels of fluoride in water (above 4.0 mg/L) can cause mottled or stained teeth in children that drink the water for long periods before their permanent teeth are in place. This mottling can cause the teeth to be more fragile and sometimes lead to increased cavities. Osteoporosis (leaching of calcium from the bones) can also be caused by high levels of fluoride in drinking water.

Contact us at Mid Continent Testing Laboratories today to see why our clients keep coming back for their private well testing needs. From wells to wastewater, we’re your trusted lab for water quality testing.

If you have any questions or are looking for more detailed information about our services,